Divine RPG Wiki
Register
Don't have an account?
Sign In
Advertisement
in: The Nether, Mobs, Hostile Mobs,
and 2 more

The Wildfire is a hostile mob that spawns in The Nether. It is a roughly humanoid monster that is the same color as the Hell Spider. As it is extremely powerful, fighting it with a melee weapon is not recommended. You should only fight it with a ranged weapon like the Bowhead Anchor or Corrupted Cannon unless you have very good armor. It's best to shoot it from a distance because it can kill you in full Rupee Armor in 2-3 shots. They can spawn in groups up to four and have one hundred health each.

Wildfires shoot flaming arrows at a high rate of fire. These arrows not only do a large amount of damage (with iron armor they can kill you in two hits), but the arrows also set you on fire, and since you can't place buckets of water in The Nether, you have to wait for the fire to burn itself out. 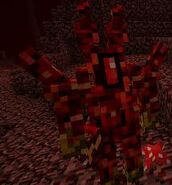