The Eye is a mob which spawns in the Overworld. It can spawn underground regardless of light level. While it is a passive mob, when the player looks at its center eye or attacks it, the player is afflicted with Blindness III for 4 seconds. The blindness counter will stay at 4 seconds until it is dead or it has been aggravated by another player. It always drops 1 Rupee Ingot and from 10-50 torches when killed.

The Eye always drops 1 Rupee Ingot on death. Rupee Ingots are useful for crafting items such as the Rupee Shickaxe. However, since Rupee Ore is very rare, killing multiple Eyes is a far more efficient way of acquiring Rupee Ingots. Also, it can also save coal if you use torches for lighting, as it drops many torches upon its death.

Spawning The Eye and Farming Technique 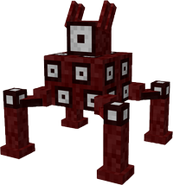 The old texture of The Eye.
Community content is available under CC-BY-SA unless otherwise noted.
Advertisement