Rupee is the second highest tier DivineRPG Overworld material, surpassed only by Bedrock, which requires Rupee Blocks to be crafted. Rupee is more common than Diamond but spawns in much smaller vein sizes. If you want to find Rupee, they are more common between y-levels 4 to 12, but they can spawn at any level below 13. They spawn in veins of 1-3 (mostly in 1). Strip-mining is the most efficient way to find Rupee Ore. One Rupee Ingot is also always dropped by The Eye.

Rupee is used to craft high tier armor, weapons, and tools. Rupee is also a requirement in crafting Shadow Bars and Bedrock. You can also craft a Rupee Shickaxe, by combining all four Rupee tools (Pickaxe, Shovel, Axe, Hoe) together. This functions as all tools combined into one infinitely durable item. As the Shickaxe only requires 9 Rupee Ingots it is recommended to save up and get one rather than the individual tools, as the individual tools do wear out.

Below is a video containing all the recipes that Rupee is used in, made by Lulyhead. All recipes are also listed on the Rupee Ingot page. 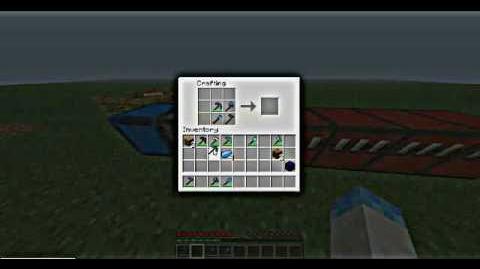