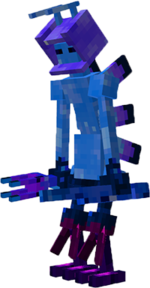 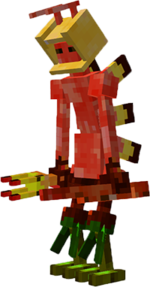 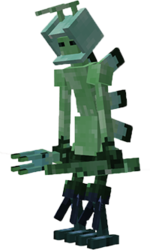 Lady Luna is spawned at a Lunic Altar. A Lunic Altar can be found in a Lunic Garden on the top floor of Vethea. When she is spawned, many light orbs will fly off of the altar and a beam of light will come down onto the altar. At this point Lady Luna will spawn in her Arcanic form.

Lady Luna has the most health out of any mob in Vethea or DivineRPG.

Lady Luna fights with a single style attack yet has a protection ability. To attack, Lady Luna runs around the garden quickly towards the player. If the player moves from their location, she will miss and charge again. While running at a player, Lady Luna will lay down Lunic Acid on the ground. The acid deals 10 Points (

x5) of damage when a player steps on it.

The combination of her attack style and her protection ability makes her a very difficult boss fight. She can easily trap in a player by circling them and thus Lunic Acid is on all sides of the player. Due to the protection switching, it can be very hard to damage her at times, especially in her melee form as hitting her with melee is very dangerous.

Since Lady Luna has protections, it is advised to bring all three types of weapon styles. This is because otherwise it will be hard to bring her health down at an efficient rate since she will be invincible to the player for a portion of the time.

Although a melee weapon should be brought, it is still advised to try and avoid her in her melee stage. This is because during her melee stage she can easily hit a player if the player approaches her. However, if the player avoids her and only hits her when she gets near him, the player will likely maintain a lot more health.

It is advised to keep moving and not in a circular motion. If a player moves constantly in a circular motion then Lady Luna can easily trap the player within Acid. Being trapped within the Acid is very dangerous because it can quickly bring a player down to Zero Hearts.

Upon her death, Lady Luna will drop 128 Ever Arrows, and 1 Everbright.