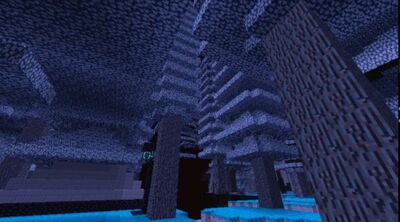 Iceika is a dimension that has many ice themed weapons for trade and mobs. It is recommended to have better armor than Realmite Armor before you enter. This Dimension is a boundless, icy forest with huge trees.

How to Get There

Iceika can be entered by creating a portal out of snow blocks in the 4x5 pattern of a Nether Portal. The portal is lit with a Snow Globe.

Iceika contains many naturally occurring structures, some with merchants inside. These merchants will trade you for some otherwise unobtainable items. There are also many dungeons found all around Iceika below the surface.

This is probably the easiest dimension to survive in.

This dimension is supposedly not as difficult as Eden, but by no means is it easy. Eden has only one main hostile mob, Cadillions, while all of the Iceika mobs (not including NPCs) are hostile. It is recommended that you craft Diamond Armor or better, Elite Realmite Armor being a good choice. There are some very annoying mobs in this dimension that will tear at your patience. Hastreuses will slow you down, and Frost Archers shoot powerful arrows very rapidly. It is recommended to find a merchant, then see if one of your items can be traded in for something better. If you can get Snowflakes and you happen to have a Slime Sword or a Sandslash (full lists of tradeable items are found on the Workshop Tinkerer and Workshop Merchant pages), you can use the Snowflakes to upgrade them. These new swords should help you out in early dimensions such as Eden. If Iceika happens to be your first choice, you should take any improvable swords to a merchant to upgrade them. It is strongly recommended to craft Bedrock Armor if you can. Note: To get Snowflakes, look for underground dungeons, which may contain them. However, even in dungeons, Snowflakes aren't that easy to obtain.

Dungeons can be easily found underground and are similar to Overworld dungeons. They are made of indestructible blocks that cannot be broken (even by explosions). Notice that each dungeon has an entrance covered with ordinary Frozen Stone that CAN be broken like common cobblestone. This means that the player will need to go around and search for the entrance.

Inside the dungeons are a few hallways and rooms with spawners inside. The floor is made of a unique material similar to mossy cobblestone. The spawner can spawn Frost Archers sometimes, so be careful. Once you break or neutralize the spawner, it is safe to get the chests in the room. They have no usage, but when you break them, you get a Snowflake, the currency used in Iceika.