To access Apalachia, the player must construct an Apalachia Portal in any dimension. To create the portal, the player must first build a rectangular frame using Wildwood Blocks, ranging in size from a minimum of 4x5 to a maximum of 23x23. Once the frame is built, it is activated by right-clicking it with a Twilight Clock.

The portal allows most entities, with some exceptions[more information needed], to be transported to a corresponding point in Apalachia. Travel through the portal is instant in any gamemode. If there is no corresponding portal, a new 4×5 portal is created. The portal can be destroyed by breaking the Wildwood Block frame, by a nearby explosion, or by placing water or lava into it with a dispenser.

Terrain generates in Apalachia from at least Y-87[more information needed] to Y-18. There is no ceiling or floor, making a fall into the void almost certainly fatal. Apalachia has a daylight cycle and weather like the Overworld. Plants and trees spawn across Apalachia, similar to the Overworld but all with Apalachia's purple hue. Occasional lakes of Smoldering Tar can be found on the surface. As opposed to previous Twilight Dimensions, hostile mobs spawn regardless of the time in Apalachia, and do so in greater numbers.

Most items and blocks in Apalachia function the same as they do in the Overworld, with a few notable exceptions:

Apalachia has only one biome, named after itself. Like previous Twilight Dimensions, Apalachia is composed of floating sky islands. However, Apalachia's islands tend to be larger and more connected than prior dimensions. Most of the surface of Apalachia is covered in trees and plants. Underneath the surface lies Twilight Stone which extends to the bottom of the floating islands. Caves do not generate within Apalachia, though some terrain may generate in low, partly enclosed areas. Veins of Apalachia Ore and Stone deposits of Smoldering Tar spawn under the surface of the Twilight stone.

There are five different structures that generate in Apalachia, all of which spawn on the surface.

Below is a list of all blocks that generate naturally in Apalachia:

View of some islands in an older version. 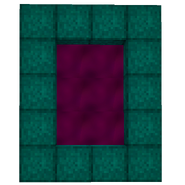 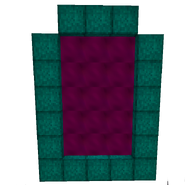 Apalachia Portal in an unusual frame, demonstrating that it has the same size properties as the Nether Portal frame.

Apalachia Fallen Log Variant 3. (the 2nd variant is shown in the "Structures" table.

Apalachia Pillar Variant 3. (Variant 4 is shown in the "Structures" table.)